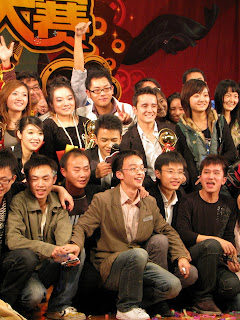 Southwest University in Beibei recently sponsored a talent contest. Two of our most intrepid students - Dylan Ronan and Valentin Sierra - entered. They knew nothing of the popularity or scale of this event. Arriving the first night (and thinking that it would involve only a few people), they found that over 500 people had entered originally; that people were there in formal dress; that professional lighting and sound people were there ... It was a BIG deal.

Both of our entrants did us proud. And, after all the voting, Valentin ended up making it to the final round, where only fifteen entrants remained! This final round was this last Saturday night, November 1. Held in a large auditorium, the event was packed with a crowd estimated at 800 people.

Valentin, who is an international student at St. John's from Columbia, chose to sing three songs overall - one in English, one in Spanish, and one in Chinese! Groups of five entrants sang at a time, after which one was "voted" off. Valentin had a hard time because everything was in Chinese - so he stood up on stage, smiling and nodding, but not having a clue whether he was supposed to stay or leave. Often he would look as if he were heading off the stage, and they would indicate that he should stay.

Finally there were only 5 contestants left, then four, then three, and at last only two. One was Valentin and the other a Chinese young woman. The five adult judges voted - four votes for the young woman, one for Valentin. But, each college of the University had one student who voted as well. After the student voting, the young woman won first place with 18 votes in total. Valentin had seventeen votes in all! He came in second, but was the heart-throb of all the Chinese girls in the room.

They tried to interview him afterward, but it was all in Chinese. So, he summed up his Chinese language training and shouted, "Wo ai nimen!" (I love all of you.) The crowd went wild. He was swarmed for autographs. 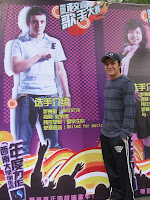 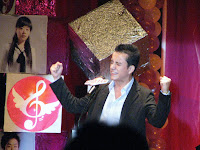